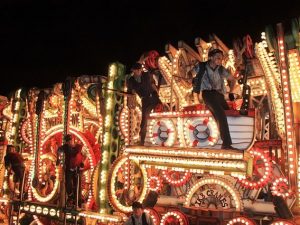 With its roots back in the 17th Century, the tradition of illuminated floats, known locally as ‘carts’, parading through the streets of West Country towns has become a spectacular annual event, drawing hundreds of thousands of locals and visitors to witness these breathtaking processions.

It was gunpowder, treason and plot that sparked it all off. Back on 5th November 1605, when Guy Fawkes famously attempted to blow up the Houses of Parliament in a bid to restore Catholic power to Britain. It’s a little-known fact, however, that the instigator of the treacherous affair was a Jesuit priest by the name of Robert Parsons. Parsons lived in Nether Stowey, just a short distance from the Somerset town of Bridgwater.

The failure of the gunpowder plot was very keenly celebrated in the predominantly Protestant South West towns. Bridgwater started an annual celebration with a massive bonfire at Cornhill. Gangs of revellers added to the excitement by carrying effigies (“guys”), meant to symbolise the failed plotters, to the fire.

As time went by the Bridgwater bonfire revels became more elaborate, involving music and colourful costumes, and ultimately a key part of the event was a carnival procession. 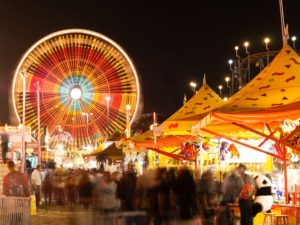 By the late 1800s, decorative lamps were part of the Bridgwater Carnival procession, but the event really became an illuminated spectacle only after electric lights were first introduced in 1913.

Bridgwater carnival was emulated in towns across the West Country but remains arguably the biggest and best of these fantastic events. Today it involves upwards of 40 massive floats (also known as carts), each lit up by tens of thousands of lightbulbs, decorated with gorgeously coloured themed figures and animations, and festooned with enthusiastic dancers. The route covers around 2.5 miles and the carnival takes about two or three hours to pass by.

The purpose of the annual carnivals is to raise money for charity, in the form of donations collected from the crowds of spectators.